Tech City Launchpad 1 – round one has now closed…

Two-minute video pitches, as with most things in life, surely tend to get done either cheaply or well, but rarely both: and seeing past the inevitable imperfections is one of the key problems facing the Technology Strategy Board’s Tech City Launchpad 1 judges. What should they look for?

Given that the TSB is a government agency, there will always be a suspicion that a demonstrable ability to surf the tide of bureaucratic checkboxes will win the day: but one of the interesting aspects of this competition is that once the votes are in, it will be clear exactly what pressed the judges’ buttons… because we can simply play the winning videos and see for ourselves.

According to the competition’s member page, 439 people joined the Launchpad 1 group, including lots of names that may be familiar to you from OpenCoffee, Flagon’s Den, etc. What isn’t yet clear is how many people actually entered, when I’ve only managed to find 37 entries actually on YouTube. Incidentally, if you want to see them all, here’s a Tech City Launchpad 1 YouTube playlist I put together. My best guess is that there probably as many again from people who have not made their videos public: so I’m guessing 75 or so entries, but we shall presumably see soon enough.

As to my own competition entry: a few weeks ago, I discussed here how startups are tiny social revolutions, and suggested that a properly informative pitch might well involve presenting a dialogue between startup and early customer. Well… for my own two-minute video pitch, I basically took that idea and ran with it as far as I could, by presenting a fictional dialogue between myself and a mythical person from the TSB, in the form of an animated “text-to-movie” Xtranormal film. Total production cost: $3.33 (the equivalent of 400 ‘xp’, Xtranormal Points). 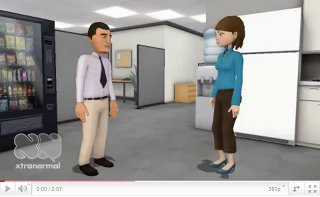 OK, in real life I don’t have as much hair as that, nor do I wear implausibly tight trousers or comedy ties (yes, my avatar is indeed the one on the left). But it was a lot of fun getting a whole load of business information across in dialogue form, and including a fair few laughs along the way, mainly at the expense of social media startups. (But not your social media startup, oooh no, you’re much better than that, so you are).

I know, I know, classical entrepreneurial wisdom has it you should “never tell jokes in a pitch”. But this isn’t a live pitch, it’s a video pitch: so do the same rules hold true? Personally, I don’t think they do, but please watch it (clicking on the picture should take you to YouTube) and let me know what you think! Enjoy! 🙂